NOVEMBER, 2016: On November 16, 2016, David Pfeifer, AIA, from Domusstudio Architecture, presented to those present at the SCFOL annual meeting of the General Membership, the plans which he and his associates presented to the San Carlos Branch Library Building Committee in October.  All present were impressed with the design.
The 25,000 sq. ft., world class Library will be a single story structure; its exterior building and landscape designs compliment the natural habitat of the area and the theme will be carried throughout its modern interior design. The main entrance to the Library is situated on the north side of the current lot. There will be an estimated 31 parking spaces including handicapped spaces on this upper level. The 2500 sq. ft. Community Room and Friend’s book storage area may both be accessed from within the main library, but they also have independent outside access. The library extends over the Golfcrest and Jackson corner lot—15 feet above the surface—creating a covered, but open, 46 space parking lot which includes handicap parking. Here the library can be accessed from a lower level Entry Court either via an elevator or stair well. This entry area is close by for those who use public transportation. Entrance to and egress from both parking areas are available via a 2 way drive which circles behind the building, connecting Golfcrest and Jackson.
The Library’s interior is “state-of-the-art” and designed with the future in mind. Private meeting/study rooms, large areas dedicated to children’s activities, two Maker spaces, a separate teen area with group study modules, and a large adult reading area with lots of natural light and seating with views that open onto an elevated outdoor terrace are a few of the design features. Lower book shelves allow for a feeling of openness and computer spaces abound. The color palate and materials used will blend with and enhance the natural habitat which surrounds the Navajo area.

Following the general meeting, the SCFOL Board approved the current design phase for the new San Carlos Branch Library as presented by architect David Pfeifer and further approved the continuation of the design process.

OCTOBER, 2016: On October 26, 2016, David Pfeifer, AIA, and his team from Domusstudio Architecture, presented the SCFOL Building Committee with design plans for a world class, new San Carlos Branch Library. These plans are the culmination of years of dreaming and the hard work of many over the last thirty years including our District 7 City Council persons and staffs, Librarians, San Carlos Friends of the Library, and community members to numerous to count. At their November Board meeting, the SCFOL will vote to accept/reject these plans in order for the Navajo Planning Group and City to move forward to make this new Library become a reality.  At this meeting, it was also reported that some mitigation on the corner lot is still needed but hopes were high that it will be completed very soon. Remember, the City cannot purchase the corner lot until the EPA has approved that the lot’s mitigation is complete.

JUNE  – AUGUST 2016: The  County department that oversees site cleanup required additional mitigation of the Golfcrest and Jackson corner lot.  For this reason, the majority of the lot will  be closed to overflow parking while mitigation continues.  Scott Sherman’s office confirmed that the funds are available for the City to purchase the lot once the County has accepted the final cleanup report, the date of which cannot be determined at this time.  In the meantime, the library staff and this Committee continue to work on the new branch library’s design with Architect David Pfeifer.

APRIL  2016: The San Carlos Branch Library Building Committee remains actively involved in all aspects of the planning and building process. At the April meeting Architect David Pfeifer shared the latest design concepts for the new  25,000 sq. ft.branch library.  Exact space allocation for each area of the library is being worked on in conjunction with the library staff and with an eye toward our community’s future needs.  We are very encouraged with the design’s direction.   This spring and summer, watch for continued activity required to complete the mitigation process of the corner lot and surrounding area which is designed to clear the corner lot for the City’s long-planed purchase.

MARCH 2016: We are currently awaiting the release of mitigation reports to the County reviewing agency and then to the City of San Diego. The Committee will be reviewing these reports as soon as they are completed and made available to us, and in turn, the Community will receive updates via this column as events warrant. 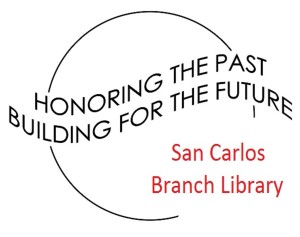 Welcome to the San Carlos Friends of the Library Website. On this site you can find the schedule of current events to be held at the San Carlos Branch Library, how to become a member of SCFOL, or how to donate your time, talent, books, or money to the library. Read more »