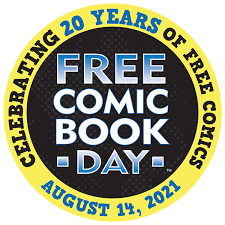 Saturday August 14, is FREE COMIC BOOK DAY at the San Carlos branch library. Come in any time from 9:30 a.m.-6:00 p.m. to pick up your free comic book while the supply lasts.

For a number of years, our Book Sale Chair, Ron McFee, has assisted in the distribution of thousands of comic books to our San Diego Public Libraries for National Free Comic Book Day. IDW Publishing, headquartered in San Diego, is an American publisher of comic books, graphic novels, art books, and comic strip collections, and donates the FREE Comic Books for this annual event, THANK YOU IDW!

The first National Comic Book Day, May  4, 2002,  was coordinated with the opening of the “Spider Man” feature film.  It is annually celebrated, and many Comic book publishers create unique editions just for this event.

Did you know that Wonder Woman is 80 years old this year? She first appeared in All Star Comics #8 published October 21, 1941. COMICS are a literary form read world-wide. They were first introduced to the American public in 1842, but not until 1934, with the publication of the first comic books and the 1938 introduction of Superman, did the Golden Age of Comics begin.

As a youngster, Ron McFee, became hooked on comic books. He describes himself as, “A natural bookworm,” and says, ” I loved the picture and story combinations found in comic books.” He credits his immersion into the stories of superheroes and their nemeses, to his early vocabulary development, advanced reading level, and ultimate career choices.  Ron is also active with the production of San Diego’s Comic-Con.  Our Managing Librarian David Ege, is also a Comic Book enthusiast.  Together, with the generosity of IDW, they have promoted this fun event, which is now enjoyed at many San Diego Public Branch Libraries.