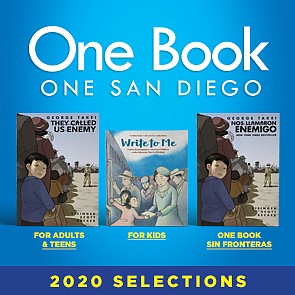 One Book, One San Diego is our region’s premier literary program, presented in partnership between KPBS and over 80 public libraries, service organizations and educational institutions. Now in its 14th year, the purpose is to bring our community closer together through the shared experience of reading and discussing the same book.

Each year, One Book, One San Diego features a literary work for adults, young adults, kids, and Spanish language readers. For adult readers, Spanish readers and young adult readers; this year’s selection is They Called Us Enemy (Nos Llamaron Enemigo) by George Takei, Justin Eisinger, Steven Scott and Harmony Becker. For children, the selection is Write to Me by Cynthia Grady and illustrated by Amiko Hirao. These books are available for purchase at the Library Shop.

“A stunning graphic memoir recounting actor/author/activist George Takei’s childhood imprisoned within American concentration camps during World War II. Experience the forces that shaped an American icon — and America itself — in this gripping tale of courage, country, loyalty, and love. George Takei has captured hearts and minds worldwide with his captivating stage presence and outspoken commitment to equal rights. But long before he braved new frontiers in Star Trek, he woke up as a four-year-old boy to find his own birth country at war with his father’s — and their entire family forced from their home into an uncertain future. In 1942, at the order of President Franklin D. Roosevelt, every person of Japanese descent on the west coast was rounded up and shipped to one of ten ‘relocation centers’, hundreds or thousands of miles from home, where they would be held for years under armed guard. They Called Us Enemy is Takei’s firsthand account of those years behind barbed wire, the joys and terrors of growing up under legalized racism, his mother’s hard choices, his father’s faith in democracy, and the way those experiences planted the seeds for his astonishing future. What is American? Who gets to decide? When the world is against you, what can one person do?”– Provided by publisher.

Write To Me: Letters from Japanese American Children to the Librarian They Left Behind is a touching story about Japanese American children who corresponded with their beloved librarian while they were imprisoned in World War II internment camps. When Executive Order 9066 is enacted after the attack at Pearl Harbor, San Diego Public Library children’s librarian Clara Breed’s young Japanese American patrons are to be imprisoned in the desert. Before they are moved, Miss Breed asks the children to write her letters and gives them books to take with them. Through the three years of their internment, the children correspond with Miss Breed, sharing their stories, providing feedback on books, and creating a record of their experiences. Using excerpts from children’s letters held at the Japanese American National Museum, author Cynthia Grady presents a difficult subject with honesty and hope.

About the Author: Cynthia Grady is a former teacher and children’s librarian, who now lives and writes in New Mexico. She’s had poems and essays published in literary, library, and educational journals. Works include; Write to Me: Letters from Japanese American Children to the Librarian They Left Behind; I Lay My Stitches Down: Poems of American Slavery; and Like a Bird: The Art of the American Slave Song.