Introducing the 2019 One-Book-One-San-Diego Titles for Adults, Teens, and Kids

One Book, One San Diego is our region’s premier literary program, presented in partnership between KPBS and over 80 public libraries, service organizations and educational institutions. Now in its 13th year, the purpose is to bring our community closer together through the shared experience of reading and discussing the same book. See https://www.kpbs.org/one-book/

The 2019 ADULT OBOSD selection, The Great Believers by Rebecca Makkai, is a novel of friendship and redemption in the face of tragedy.
In 1985, Yale Tishman, the development director for a Chicago art gallery, is about to pull off a coup, bringing an extraordinary collection of 1920s paintings. Yet as his career begins to flourish, the carnage of the AIDs epidemic grows around him. One by one, his friends are dying and after his friend Nico’s funeral, the virus circles closer and closer to Yale himself. Soon the only person he has left is Fiona, Nico’s little sister.

Thirty years later, Fiona is in Paris tracking down her estranged daughter who disappeared into a cult. While staying with an old friend, a famous photographer who documented the Chicago epidemic, she finds herself finally grappling with the devastating ways the AIDS crisis affected her life and her relationship with her daughter. Yale and Fiona’s intertwining stories take us through the heartbreak of 80’s and the chaos of the modern world, as both struggle to find goodness in the midst of disaster.

On the surface, Kwame Alexander’s verse novel The Crossover looks simple. It’s about a boy and his brother who play basketball. But it’s a much deeper, more complex novel about the challenges that exceptionally “average” characters can have. Josh is a relatable character, with two parents who are happily married. He and his brother get along. They’re passionate about the game of basketball.  In fact, their father used to play, but quit, and won’t discuss why.

Josh and Jordan must come to grips with growing up on and off the court to realize breaking the rules comes at a terrible price, as their story’s heart-stopping climax proves a game-changer for the entire family. 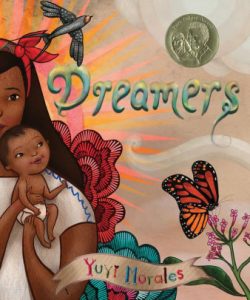 For KIDS, the OBOSD selection is Dreamers, by Yuyi Morales. (ages 5 and up)

The book is a celebration of what migrantes bring with them when they leave their homes. It’s a story about family;  it’s a story to remind us that we are all dreamers, bringing our own gifts wherever we roam. Beautiful and powerful at any time but given particular urgency as the status of our own Dreamers becomes uncertain, this is a story that is both topical and timeless. In 1994, Yuyi Morales left her home in Xalapa, Mexico and came to the US with her infant son. She left behind nearly everything she owned, but she didn’t come empty-handed.  She brought her strength, her work, her passion, her hopes and dreams. . . and her stories.

Caldecott Honor artist and six-time Pura Belpré winner Yuyi Morales’s gorgeous picture book Dreamers is about making a home in a new place. Yuyi and her son Kelly’s passage was not easy, and Yuyi spoke no English whatsoever at the time. But together, they found an unexpected, unbelievable place: the public library. There, book by book, they untangled the language of this strange new land, and learned to make their home within it.

The lyrical text is complemented by sumptuously detailed illustrations, rich in symbolism. Also included are a brief autobiographical essay about Yuyi’s own experience, a list of books that inspired her (and still do), and a description of the beautiful images, textures, and mementos she used to create this book. Winner of the 2019 Pura Belpré Illustrator Award!
A New York Times / New York Public Library Best Illustrated Book of 2018.

Also for KIDS, “Éramos unos niños” by Patti Smith for readers of Spanish.