The 2016 One Book One San Diego selection is 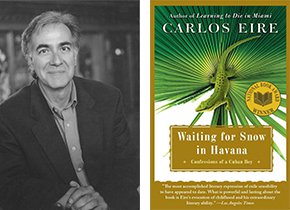 Waiting for Snow in Havana is Carlos Eire’s beautiful, nostalgia-laced memoir of his childhood in Cuba, the country he left in 1962 at age 11. Using humor, magical realism and lyrical language, Eire paints a portrait of a childhood shattered forever by the Cuban Revolution. He was one of 14,000 Cuban children brought to the U.S. without their parents as part of Operation Peter Pan. He is now a professor of religion and history at Yale University.

Guide to “Waiting for Snow in Havana: Confessions of a Cuban Boy”

Join KPBS and the San Diego Public Library in celebrating the 10th Anniversary of “One Book, One San Diego.”  SPECIAL EVENTS are being planned.