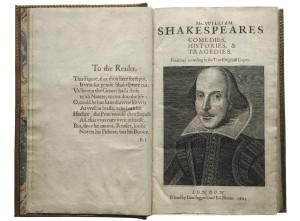 This summer marks the 400 anniversary of Shakespeare’s death. In his honor, Shakespeare’s First Folio is being sent on a nationwide tour by the Folger Shakespeare Library (Pictures are by Folger Library). During the tour, it will be on display at only one venue in each State; it can be seen at the San Diego Central Library @ Joan ^ Irwin Jacobs Common from June 4 through July 7.

Seven years following his death, the First Folio, the first compilation and publication of 36 complete works by Shakespeare, was put together by two of his fellow actors. A copy of this book recently sold at auction for more than $5.2 million. Without this work, we may never have heard of the plays Macbeth, Julius Caesar, Twelfth Night, or The Tempest. Phrases from these works are used constantly in our everyday language, such as “foregone conclusion, into thin air and spotless reputation.” Shakespeare’s themes abound in modern musicals, plays, and books. A collaboration between the San Diego Public Library and Foundation, The Old Globe, all of the region’s major universities and KPBS, has resulted in a rich lineup of exciting programs for you to enjoy during the First Folio’s visit to San Diego. Beginning April 23 you can reserve FREE tickets on the Folio website at firstfoliosandiego2016.org to see the exhibit at the Central Library and to attend other Folio Special Events.