2015: The Latest on a NEW San Carlos Branch Library 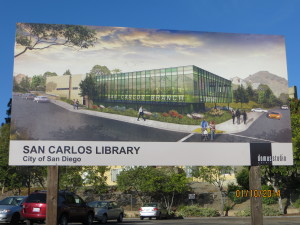 “Never doubt that a small group of thoughtful and committed citizens can change the world; indeed, it’s the only thing that ever has.” –Margaret Mead
The San Carlos Branch Library Building Committee is committed to keeping the Community updated as progress continues toward reaching its goal.

JANUARY, 2015: The Navajo Canyon Community has been anxiously awaiting the building of a new, larger, San Carlos Branch Library since the days of Jack Winer in the 1990s.  At last, there may be a new glimmer of hope.  In the spring of 2014, City Councilperson Scott Sherman held a meeting with representatives from the San Diego Public Library Capital Improvements, SCFOL Board, and the San Carlos Community, where he reiterated his support, and architects presented a new San Carlos Branch Library design that would approximately triple (25,000 sq.ft. vs 8,200 sq. ft.) the current branch size, and additionally add space for community activities.   The building would be located on the corner vacant lot, with the current  lot used for additional parking. It should be noted for area newcomers (or those who may have forgotten), that the corner lot at one time was an ARCO station.  It has been undergoing mitigation (removal of residual underground toxic substances) since the station’s removal.  The process is expected to last another two years.  Building cannot proceed until the process is complete and it has been declared clean by the appropriate government department.

“San Carlos Branch Library
This project provides for the acquisition of a lot adjoining the existing branch library located at 7265 Jackson Drive and building a new 25,000 square-foot library. This project is part of the 21st Century Library System/Library Department Facility Improvements Program.

The project schedule was updated. Report to City Council #13-088 identifies this project to receive $1.0 million of Deferred Capital funds for Fiscal Year 2015. The total project cost was also updated to reflect an increase of $11.3 million. In addition, there is another $140,000 in DIF funding available in Fiscal Year 2016 from the Navajo community. The construction phase is currently unfunded.

Current Projected Cost of the Project: $19,598,000
Quote from Misty Jones, director for the San Diego Public Library:
“The completion and opening of the new Central Library caused such a buzz and really renewed excitement in the community surrounding libraries. I am thrilled that we are now able to focus on the needs of our branch libraries. Recent City infrastructure bonds funding has been allocated for four new branch library projects. The Library is proud to be such an integral part of the City of San Diego’s economic recovery and support our neighborhoods through life-long educational endeavors and community engagement.” ”

The San Carlos Branch Library is one of four new branch libraries slated to be built.  The others are Skyline Hills, Mission Hills-Hillcrest, and San Ysidro.   According to a January 11, 2015 article in the Union-Tribune, page B-1, it’s not clear what the source of the $20 million needed to build our new branch will be.  Groundbreaking is expected to begin in 2018, but lot mitigation and/or financial considerations may affect the start date. Please be aware that neither the new branch library design of 2007 as it appears on this website nor the one on the new corner sign, is the final design.

Please help us to continue the campaign for a new San Carlos Branch Library by joining SCFOL.  Remember, MEMBERSHIP COUNTS!